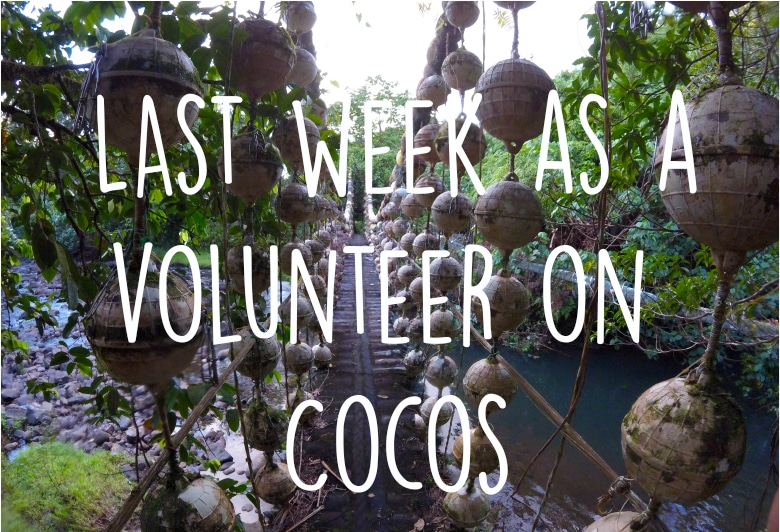 Diving has not been the main focus in the final week. Spending most of my time on land I was able to explore the island and encounter some of the flora and fauna, both indigenous and invasive. I was amazed to hear talk of ‘glowing sticks’ on the island. Cuberro, a ranger on Cocos, had first encountered them one night whilst walking through the jungle several years ago. With his fellow rangers doubting the existence of the mysterious sticks, Cuberro retrieved some from the jungle to stack in a pile near the camp. With night falling, a short walk was all it took to see sticks grouped together and glowing a bright florescent yellow. Whilst likely this bioluminescence is due to a fungus the image of them brings to mind something out of a fairytale landscape.

Falling in love with Cocos

Throughout my time on Cocos I was continually impressed by the work carried out by the rangers. Whether they were promoting and supporting the conservation efforts, displaying local island knowledge or simply through the clear enthusiasm towards their work. The expertise and dedication the rangers showed on the Island was inspiring.

The rough terrain makes it difficult to venture out of camp. With the ranger’s hard work and over many years though, trails have been constructed which were all created using recycled fishing lines, hooks and buoys.

The most famous and beautiful example of this can be seen close to camp. This is a bridge made from the recycled fishing materials crossing a river. The sheer volume of fishing gear retrieved was quite staggering; there was one large outbuilding stacked high with discarded fishing nets. If left in the ocean, would pose a severe and continuous hazard to marine life. There are continued conservation efforts around the world, like those being performed on Cocos. Maybe we can hope to see a decrease in the amount over the coming years.

With my final day as a volunteer slowly approaching the infamous island boat tour was scheduled. A ranger named Eduardo took a group of us out on a small panga. Eduardo has been working on the island for the past 25 years, which, with his wealth of experience and eccentric personality, ensured the tour was certainly entertaining; he delivered the tour with many informative facts and frequent jokes. Flat, calm waters greeted us as we approached Chatham Bay.

With the visibility so clear, the colourful corals could easily be seen from the surface. Whilst the boat was stationary the infamous Lagarta passed beneath us. Lagarta is the name for a particularly bold 4m Tiger shark that inhabits the waters of Cocos. Her reputation means that unfortunately sightings of her are not well received on the reserve, with the rangers justifiably worried about divers safety when she passes. Over this past month I have had the privilege of diving and assisting with capturing camera footage, some of which she appears in. She seems calm in the water, albeit occasionally more inquisitive than other tiger sharks. The captured footage showed scarring around her mouth, which could potentially provide an insight into her unique personality.

The last full day meant one final dive. Manuelita profunda never disappoints with copious amounts of hammerheads approaching from all angles. As Cuberro and I were dive buddies we distanced ourselves from the tourist group. It is truly awe inspiring to watch scalloped hammerheads deliberately swim past as they patiently wait for barber fish to clean them. Sometimes it seemed as if whole families would approach the cleaning station when small juveniles and large adults could be seen together.

Once more, it was not difficult to find evidence of injuries to the sharks caused by man. A fishhook sticking out from one passing hammerhead’s nose was a reminder that even in a protected national park the wildlife could still be at risk.

Fortunately, however I was told that sightings such as these had become less common in recent years. This is due to the rangers having access to more sophisticated monitoring techniques. These include sonar to detect approaching vessels and radioing unknown vessels attempting to enter the marine protection area. This wards off any suspected shark fishing boats).

The final dive showcased how having government run environmental conservation programs in place is important. Also all the support necessary to continue protecting Cocos. To ensure that we are not the last generation with the opportunity to see a healthy, diverse and unspoilt marine ecosystem. We can hope that other countries follow the example of Costa Rica in this regard and that this level of protection will become more common worldwide.

It is sad to say good-bye to the treasure that is Cocos. I have learnt so much and had experiences that I could only have imagined when I first started diving. But it was the caring community of rangers and volunteers that helped make my time here truly memorable and I left the island having made some lifelong friends. It is satisfying to leave this place. I feel confident that the conservation work will continue for as long as necessary and with the best people to perform it.

Thanks Cocos, it’s been great!