Into the water at Cocos.. 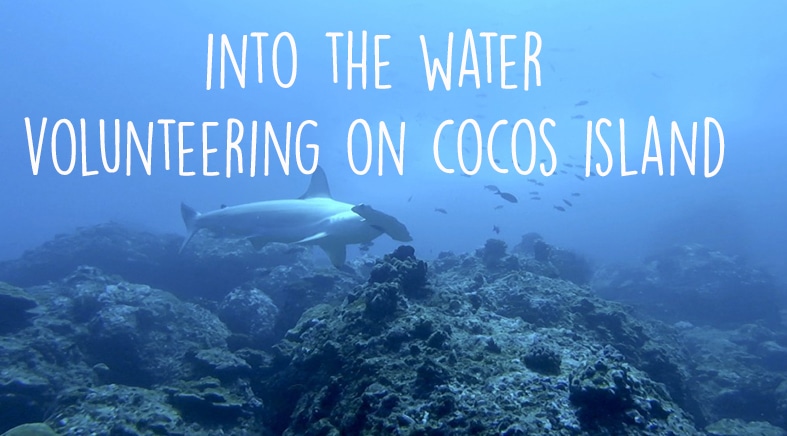 Into the water on Cocos

No wonder Jacques Cousteau expressed such a love for coco island; referencing both the marine biodiversity and lush foliage of the forest. Numerous waterfalls can be found scattered across the island, few visible only by sea, and others by exploring the rugged trails of the national park. This morning a rainbow could be seen arching across the cascading waterfall.

Not your average commute…

The morning commute is its own adventure, hauling tanks over shoulders, walking across the remote island beach. Taking the ‘Panga’ to dive with the tourists follows this. With Eduardo at the helm, the key is to hold on tight, surfing the waves quickly during the approach to the liveaboard.

Today was the third day diving with tourists, as well as collecting the specified data. Shark Water’ was the chosen liveaboard, here I joined the tourists for three dives. After the past few days it has been clear the abundance of life that frequents the waters surrounding Cocos.

From macro to mega fauna

From macro to mega fauna, plentiful species can be found beneath the oceans surface here. Hammerheads pass by in the masses during every dive, using Manuelitas thriving reef as the perfect opportunity for a clean. The fish life here is so healthy it is easy to forget the damage humans have caused to our oceans. Yellow fin tuna pass, measuring close to 2m, but I’m told larger can be seen.  Todays dive, a surplus of 150 passing hammerheads were counted, at the same time, large schools of snapper passed by the reef below.

Diving with ‘Shark Water’ has been a unique experience. The majority of passengers are scientists conducting research projects during their stay; the few lucky tourists that pay to dive with guides and scientists fund this. Currently the scientists are using acoustic monitors to tag sharks, rays and specialised fish species.

The aim is to collect data about migration and behaviour. Watching the shark tagging can be an exciting experience, willing the scientist to produce a hit. The tiger shark is the main goal for the trip; luckily 1 tiger was tagged during the first dive. Unfortunately the 3m tiger swimming very close my head overshadowed my first ever sighting of an eagle ray.

With all the excitement it was difficult to photograph both the tiger and Eagle rays. Hopefully, the possibility will present itself again in next few weeks.