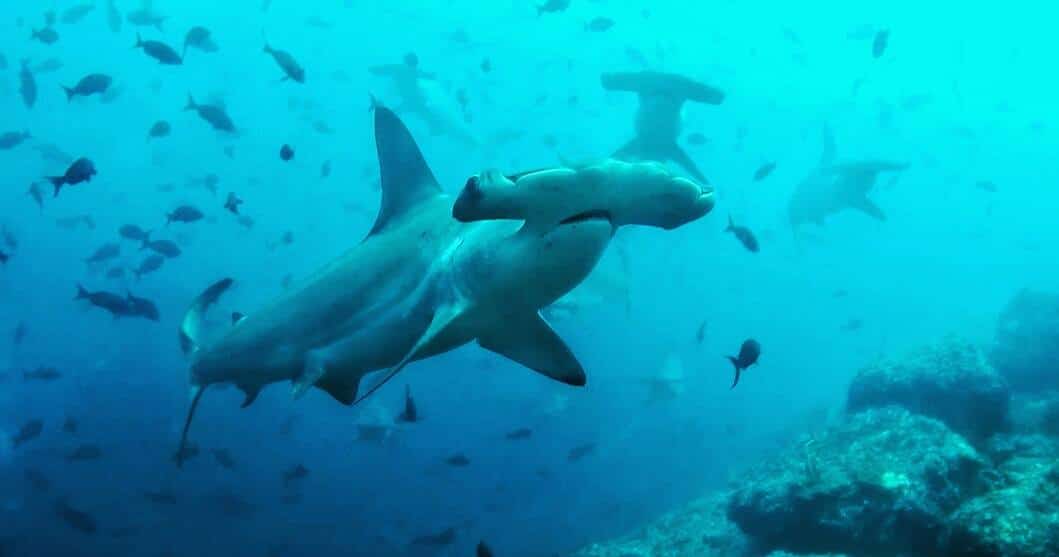 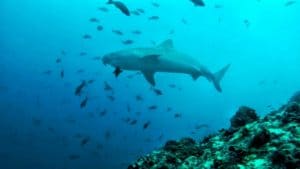 The last few days have been awesome, and full of diving. It was pretty slow going in terms of diving until sunday, but since then ive been on several dives everyday. On Monday I had my first tiger shark encounter in the shallows of chatam bay during a safety stop, which was a little nerve racking. I was looking away from my buddy, and i turned around to see a full grown tiger shark swimming up, and towards us ( about 15 feet away when I turned) I made eye contact with my buddy and pointed behind him, and as he turned the tiger was maybe 4 feet away from him. It was startled by my buddies swift movement, and swam by us and then back down towards the reef. It was pretty intense, mainly because it was swimming up at us which was a little sketchy ( typically you’d like to be below a tiger shark). After that we did our briefing to the tourists, and then did manuelita deep, where we saw another 4 tiger sharks!

We made our way back to wafer bay and got called on the radio by the sea hunter crew to come aboard for a quick word. One of they’re dive master had ripped open his hand with a carabineer ( it was brutal but he was okay) so they asked if Cubero and I could step in for the rest of they’re trip. 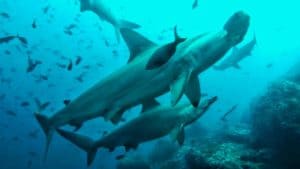 This meant that I would be living on the boat from monday-wednesday, and be doing 3-4 dives per day, so naturally, I was stoked. My role was essentially to keep track of all the divers, making sure that everyone was accounted for, as well as to continue to take data. I ended up doing dirty rock twice, manuelita deep three times, manuelita Chanel twice and a night dive near Chatam bay. All of the dives were great, but the schools of hammerheads at dirty rock, and the chaos of the night dive definitely stole the show. On the first dirty rock dive, we turned a corner into a ripping current, and had to quickly turn back around the corner to calmer water. One of the divers was struggling, but had managed to grab a rock with one hand ( her other hand holding her several thousand dollar camera). She was essentially stuck, and loosing strength in the hand she was clinging to the rock with. I let go of my perch and went over to help, essentially dragging her by her tank valve until we were around the corner. After we were in calmer water I realized I no longer had my GoPro, and then it hit me that I was holding it while I went over to help, and had dropped it basically immediately upon reaching the diver. It currently rests somewhere north of dirty rock :/. Karma however works in interesting ways. One of the other divers had watched all of this unfold, and proceeded to gift me a new GoPro 4 ( housing and all) upon returning to the boat. To this, in Costa Rica, we would say ” que Buena nota Mae”.

I think my most memorable dive of the trip so far ( they keep changing), is the night dive. The intensity level was just so high for the duration of the immersion. Essentially we would search for straggling fish with our lights, and then wait for the white tips and black Jack’s to spot it. Once a fish was found, it did not survive long. A swarm of Jack’s and white tips would surround the fish and overwhelm it until it had nowhere to swim. It was interesting to see that the big Jack’s were usually the consumers, and not the white tips. During our night dive our guide had everyone turn off they’re lights for a few minutes, which would unveil the bioluminescent plankton that were surrounding us. It was definitely super eerie being in shark infested waters in the dark, but the star like twinkling of the plankton was unreal, and has been a dream of mine to experience. It was such a treat to dive on the sea hunter for 3 days, and get a feel for the routine of a liveaboard here at Coco’s. 8 dives later however I was ready for a day or two out of the water. Diving on a liveaboard was surprisingly exhausting! So now I’m back on the island to do some work around the living area. There should be lots more diving and stories in the upcoming week. Until next time,