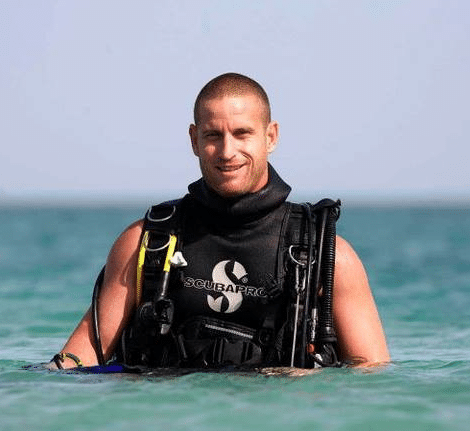 And he descended upon a shark. 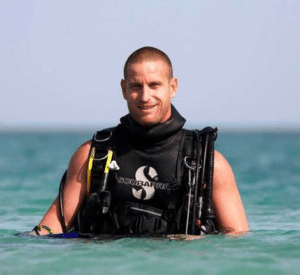 Maybe it was a sign from the scuba gods on Ernst Van Der Poll’s first dive in Awiwal Shoal. He loved it– “It was sensory overload, just with all the colors, and all things underwater”. But Ernst wasn’t exactly born a diver; he was born a lifeguard. Scuba was reserved for people with higher incomes, and Ernst was a professional lifeguard living on a small salary. Later, he became a lifeguard rescue specialist. Ernst claims that his lifeguard training served as an introduction to diving.

Originally from Port Edward, South Africa, Ernst completed the majority of his scuba training (through instructor) at a dive center in Dubai. Ernst emphasizes the importance of choosing the right center and instructor; “Training is your foundation, your basis”. He explains that what one learns becomes very valuable later on—when well trained, one has the ability to recall, and the ability to recall training builds confidence. “When you learn, and apply this learning to overcome obstacles, you obtain an independence in which you can take care of yourself”. At the end of training, a diver should be able to rely on himself. But why is self-confidence so essential?

Despite swimming amidst sharks and down currents, Ernst has never been terrified underwater—which he attributes to quality training and self-confidence. These two factors can manifest a levelheadedness, seemingly a calmness, amidst high stress situations. But this confidence isn’t easily attained— especially for the disabled, who rely on other people every day of their lives.

Ernst has developed his own organizations to support disabled divers. Sin Limites (Without Barriers) strives to transform Costa Rica into a disabled diver destination. Adventure Team Building Costa Rica engages corporate groups in order to fund two programs—one which spreads marine conservation awareness among young people, and the other teaches the disabled to dive. Ernst has also worked with the organizations Disabled Divers International (DDI) and the Palestinian Child Relief Fund (PCRF).

But it all began with Miriam.

When Ernst was 14 years old, he met Miriam.

He worked on a farm for a community volunteer program in Mozambique, where he played with Miriam. And then she smiled..

Miriam was riding on her mother’s shoulders when the landmine exploded. She survived, but remained in a catastrophic state. The woman came from a nearby refugee center, a shelter for victims of landmines. Usually the adults loose both legs, and the children die due to height and the close proximity between vital organs and the explosive. Ernst was only five years older than Miriam, and realized his good fortune. “If you can make a difference in one person’s life, even if it’s just to smile, it’s worth it”.

And whether or not Miriam knows it, she has inspired the healing of countless victims. Ernst says, “You’ve been dealt a hand, and talents, and it might not equate to a lot—but it makes a difference”.

Khalil used to play soccer every day; until he lost his legs.

During an Israeli air raid, Khalil lost his limbs, his home, and his brother. He lived in poverty and oppression; and furthermore, a serious state of depression. Palestine couldn’t offer the necessary help, so Khalil joined the Palestinian Child Relief Fund to partake in scuba lessons. Once underwater, Ernst could see an immediate change—Ernst beams with exploding hands, “His eyes widened”. On the first dive, Khalil somersaulted and wasn’t ready to ascend. He became the first double amputee to earn a PADI open water certification.

Before loosing these limbs, Khalil likely never thought of diving or breathing underwater. Now, he’s certified and earning a business degree; furthermore, a role model within his family. Ernst believes that the self-realization gained through scuba was not the driving force of his success, but a pivotal factor.

Khalil used his disability to his advantage. He encountered and overcame a new set of obstacles, and challenged himself in way that he never could’ve before. With these new challenges, came growth. “Everyone has a comfort zone and challenges. It’s not a natural phenomenon to challenge your comfort zone, but you must do it”. Or else, Ernst continues, we’d all be couch potatoes.

Unlike Khalil, Ernst doesn’t usually see an immediate change in disabled divers. “I don’t think I can see it.. It doesn’t impact them in that moment, but you’re equipping them”. Ernst explains that after a longer period of time, you can usually see a difference in their eyes– “You have to keep kindling their spirit, you have to keep investing, to see it”. People with life changing injuries suffer spells of depression, and as an instructor, Ernst explains, “You have to give advice. You are not a doctor, or a psychologist, but the best thing is to listen and hear them”.

His strategy is based on the empowerment of the individual, in which instructors teach the divers to believe in themselves; however, there’s a fine line between over-assisting and letting a diver learn on his/her own. Overall, “The line should be drawn to help them, help themselves,”. Ernst explains that after a 60 foot dive, or new certification, a diver becomes empowered. “These accomplishments realign other obstacles and barriers”, such as daily challenges outside the water. This newfound empowerment is a source of self-confidence that’s transferable to everyday life.

According to Ernst, diving requires a mindset of problem solving and solution thinking; scuba “coaxes people to think in a certain way, and it’s transferable to other areas of life” (Ernst). This mindset is essential, considering the link between thinking patterns and self confidence. Disabled divers rely on other people every day of their lives, which can take a serious toll on self-confidence. As an instructor, Ernst seeks not to change these divers, but to reform them in terms of confidence.

According to Ernst, reform can also occur through two therapeutic aspects of scuba, such as lack of gravity, and connection with nature. In a weightless world, pressures can disappear—gravitational pressure, and some human-expectational pressures as well. Those who cannot move on land can move freely underwater, and the disabled become abled. Also, connection with nature has proven to be a life-healing force; when diving, one is completely immersed in nature.

The connection between humans and nature seems undeniable—especially through a particular story, told to Ernst by his dad. On the beach, an old fisherman watched thousands of starfish in bake in the sun from a red tide. A little girl approached the dying field of starfish and picked them up, one by one, and threw them back in the sea. After an hour, the fisherman finally yelled to the little girl—you’re not making any difference. But the girl continued. She picked up each starfish individually, and tossed him back in the ocean.

She responds—‘but I did for this one’.

She tosses another—‘and for this one’.

And I believe Ernst has been captivated—the ocean has seriously influenced Ernst, and who he is as a person. “Lifeguarding is the medium, scuba is the medium, and the ocean is my passion”. He lives by Winston Churchill’s advice to find your passion, and make it your career. And by doing this, Ernst believes, “Me and you both have the ability to open eyes and instigate a fire. Ignite that fire, one diver at a time”.