Funday Sunday is here, but if you live and work where I do most days are “fundays”. A swell has come in and dropped the viz which isn’t so good but also with that there has been a surge of krill in the water which has brought us schools of jacks, barracudas and other large fish closer into shore.  Talking about big fish, I had the opportunity to go diving last week with some beautiful billfish. I was asked to safety dive for  the billfish research project. The idea behind The Billfish Research Project is to pursue collaborative efforts between the science and sportfishing communities to enhance the billfish research knowledge base. They do this by deploying tags into , at the moment, sailfish around the waters of Quepos and Manuel Antonio. Information from these tags includes location, depth and water temperature and is then relayed back to researchers.This information will be communicated to fisheries management policy makers, the scientific community and to the worldwide sportfishing community. With the popularity of “catch and release” sport fishing and the obligatory photo of your catch onboard, there is an element of stress for the fish, especially as well whilst the fish is fighting when being brought in. In extreme cases this can lead to the death of the fish. One of the aims of the research project is to look at more humane ways of doing this and specifically look at stresses on the fish involved. Already implemented on the boats involved is the fact that no fish are brought onboard. They are unhooked and then released again as quickly as possible.
During the couple of days I was out with the team whilst deploying the satellite tags, we were also looking at the release of the fish from the underwater view point. Firstly, to be in the water with these fish in pretty amazing in itself, but to watch them as they are released is certainly something else. One of the things we noticed was the fact that they slowly swim, but on reaching a thermocline, it will spring them to life as they swim off into the deep. 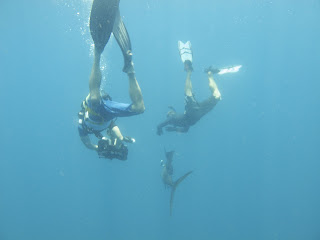 Reasoning for the safety diver position on this particular week was the presence of a film crew filming a documentary about the project. As the underwater shots are taken its my job to watch the divers filming, and basically “stay out of the shot”. Best position is about 2 ft behind and slightly blue. I definitely had a couple of “Jaws” moments whilst pursuing the Camera man, it was such the perfect shot!! “Blue” diving is one of my favorite things, as you are hanging out, with no bottom to reference and staring into the vastness of the ocean. You really do start to feel small!

After 2 successful days, the project managed to deploy 4 tags. Results are already being taken and  more tags will be deployed in the future. As for the filming it was fun and certainly a fantastic experience to be in the water with such beautiful creatures.